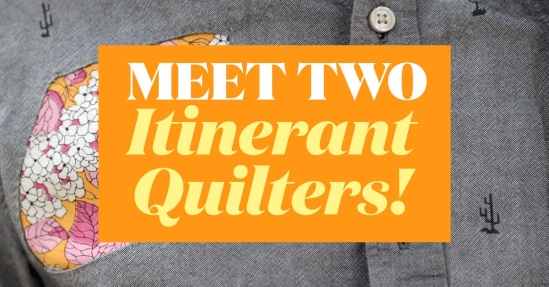 What would you say if a complete stranger came up to you in the street and asked to cut a patch from your clothes? Artists Joanna Wright and Lenka Clayton intend to find out in their project Two Itinerant Quilters, where they will ask members of the public for permission to cut a patch from their clothing to add to a quilt that will tour the country. The project was inspired by the long-lost profession of 18th century travelling quilters, who would stay with families in order to create patchwork quilts from old clothing, rags and sacks found at each home. Joanna and Lenka will set up a temporary tailor shop at each location, and invite passers-by to allow them to cut a diamond-shaped piece from their clothing. Afterwards, the garment will be immediately repaired by hand with a contrasting piece of fabric, while the collected diamonds are sewn together to create a quilt that will grow as the project tours the world. “I’m from rural north Wales, and I’d heard about itinerant quilters as a child,” Joanna begins. “Very little is documented about them and most of what is known is anecdotal or passed down orally. The objects these craftspeople made were utilitarian, and at the time little value was seen in recording this aspect of history. As a skilled trade that took a lot of time, it was perhaps a service needed in rural places where the women of each family had their hands full already.”

Joanna and Lenka met each other while studying Documentary Film at the National Film and Television School in Buckinghamshire, England, where they discovered a number of shared interests. “We were both taught how to sew by our grandmothers, and love handmade and repaired objects, travelling professions, and the fascinating stories behind cultural rituals that have been lost to time,” Joanna continues. “In addition, Lenka and I currently live in different countries, and our work means that we are often quite transient ourselves, wandering from place to place to complete projects and commissions. We wanted to find a way to work and connect, despite actually seeing very little of each other in person – so, we began working on a collaborative patchwork by post, which is what inspired the itinerant quilt project.”

The pair have already held two events in America, and another two in the UK last year, where they received a wide variety of responses to the question of cutting a patch from the wearer’s outfit. “A small handful of people gave a resounding “NO”, while others, who had heard about the project before, actually brought garments that had a specific special meaning to them – which they wanted to share,” Joanna reveals. “Some spectators see the repair we make as an improvement that turns their mass-produced garment into a unique piece, and a lot are curious and just want to take part.”

In addition, the two artists ask the donator to share an anecdote connected to their garment. “These are really eclectic and often hilarious, inspiring or moving,” Joanna tells us. “One lady brought a shirt that had belonged to her late sister. She wanted to share her memory, and the alteration was a way of connecting with her. Another favourite comes from an older ladies’ powerlifting team in Missouri, while one of the funniest is about a shrew and a teabag…” “The aim of our project is to connect people via these stories and capture the diversity of the tellers in a quilt made from their garments, but also to create the possibility of people sporting clothes with a visible, distinctive patch – perhaps bumping into each other on the street,” Joanna explains. “We’re slowly piecing the quilt together – so far we are planning to cut 1,000 pieces from as many diverse contributions as possible. No one leaves the house that morning imagining that the clothing they’re wearing will become a quilt. We love the unexpected encounter, and the idea of offering people a new end to their day.”

To see the progress of the project, and read the stories of those who’ve taken part, visit twoitinerantquilters.com 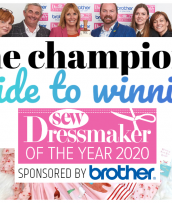 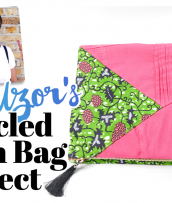 Dressmaker of the Year will be closing on 9th March 2020, so it’s time to get a wiggle on and send…

Dressmaker of the Year will be closing on 9th March 2020, so it’s time to get a wiggle on and send… 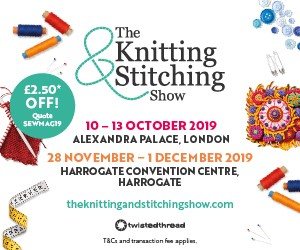