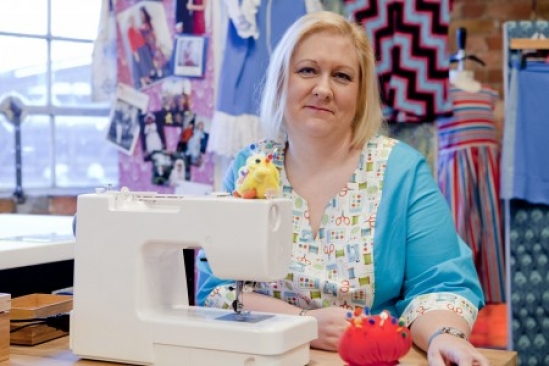 Series one contestant Stuart Hillard on the GBSB semi-final, where the contestants faced their ultimate challenge so far, Puzzling Patterns and Pattern Cutting Week!

“The Sewing Bee semi-final was all about challenging patterns (that makes it different from the previous six weeks how?) and Joyce, Jade, Tracey and Charlotte were the last women standing. Who was going to show the right mix of experience, skill, flair and nerve to make it to the final?

“Episode seven started with a flared, voluminous asymmetric skirt, taking its inspiration from modern Japanese tailoring. The pattern made perfect sense when you saw the video of how it all worked together, but without that it would be double Dutch! Charlotte, Tracey and Jade all used wool and Joyce went rogue with a cheeky neoprene number (Joyce! Back to being naughty, are we?) The skirts all looked pretty fabulous and so began Charlotte’s rise to the top. Tracey came last, Jade came second, Joyce made it to second place despite ropey top-stitching and Charlotte came first.

“The Alteration Challenge demanded that the contestants use a duvet to create a garment with a striking silhouette and zero wastage. There’s a first… no cutting away allowed! This task was much more about draping, gathering and ‘sculpting’ with the fabric. Half mannequins allowed the sewers to create in smaller scale with pillowcases before they committed to their final design. Scary stuff! Tracey made ‘shelves’ for her garment and I can only second her words of wisdom: “You can never have enough boning.” Charlotte’s black and white check creation was by far the most impressive and had a real style about it. She came first and quite right too.

“The final challenge was to take a ‘block’, or basic fitted dress shape, and create their own one-of-a-kind creation. I thought that Jade’s idea was the only one that really pushed the boundaries and surely that is necessary to make it to the final? Her tribal fabric choice was wonderful, although it wasn’t easy to pattern match and you know how fussy Patrick is about that! Joyce stayed cool and calm with a very elegant chocolate brown patterned linen, while Tracey’s plans unravelled over her bust line. Charlotte’s dress just didn’t fit her model at the halfway stage. Was there enough time to turn things around? Of course!

“In the end, Charlotte’s cowl neck dress was soft and romantic, and impressed the judges. Joyce’s panelled tea dress lacked a bit of fit but her sewing was impressive. Jade didn’t disappoint with her sleeveless skater skirt design, it looked super chic despite a couple of issues. Tracey did herself proud with her ‘50s style frock, although I didn’t love the look. Charlotte won Garment of the Week with her fabulous alteration piece and it was good to see something a little more ‘out there’.

“Hearing the judges talk, it was clear that Jade and Charlotte were through to the final. Tracey and Joyce both found themselves up for elimination and in the end it was Tracey who took the final walk from the sewing room. Massive hugs to you Tracey, you were without doubt the ‘Sewing Bee grower’ and it was wonderful to see you attack every challenge with such vim and vigour.

“So who do you think will win the fourth series of The Great British Sewing Bee? Charlotte has been sporting a new Sewing Bee tattoo for the last few weeks on her blog and I’m not sure that’s the kind of thing you’d do if you came second! The last two series have shown that winning hinges on what you can pull out of your (sewing) bag at the last minute, so I shall watch next week’s final episode with great interest!”

Check back next week for Stuart’s report on episode seven, Evening Wear Week!

Love the show? Subscribe to Sew and receive a FREE copy of the new accompanying book, The Great British Sewing Bee: From Stitch To Style, plus 2m of fabric! 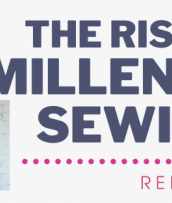 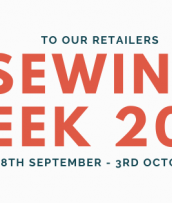 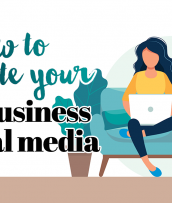 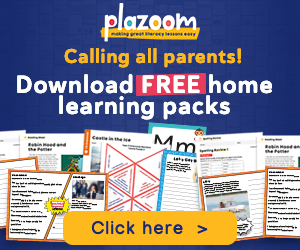